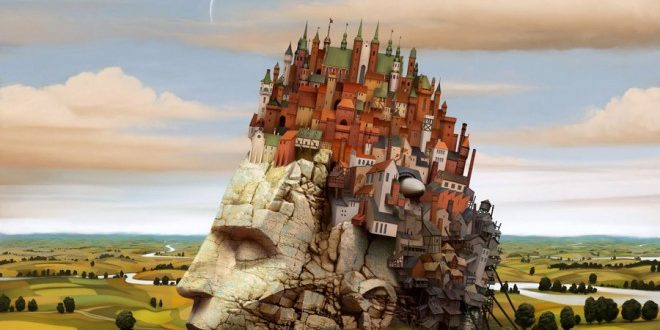 How can you convert a strong God believer into someone who opposes everything that the Holy Commandments represent? Just cast a spell: “Abracadabra, God does not exist and claiming so is against logic“. Regardless if you keep or skip “abracadabra”, you will create hell. How can you convert a very rational modernist into his irrational counterpart? Just say that science is not able to answer all questions and watch how your subject reacts.

When the believer and the rationalist meet each other, it does not matter how the discussion starts, it always ends up as a vivid rhetorical battle about whether God exists or not. I do not see the point in answering this question and taking sides because it would momentarily switch our minds into combat mode; thus, any reflection wouldn’t be possible. I’d rather focus on the dialogue itself and key conflict areas.

When talking to a modernist, a believer hears that God’s existence is not rational. He spends hours speaking about a great number of inconsistencies in the Bible. You can ask him about a dozen of scientific discoveries which falsify the biblical age of the World. My favorite proof is a thought experiment in which God is given a challenge to create a rock that is so heavy, he cannot lift it. You agree that God is in trouble. He either cannot create the rock or cannot lift it. The conclusion is that he is not almighty. God with limitations is not God. Thus, God’s existence is not possible.

The recipe for the proof

How does reality look from the modernist’s point of view? Let’s draw it. There is a hypothetical God? who has created World.

Human is a part of World.

Mind is a part of Brain.

And Soul is the Mind‘s illusion. A radical modernist usually has a mission to cure this cognitive error.

The modernist believes that science can solve any problem and achieve any goal. It’s just a matter of time and resources. (A vengeful believer could ask whether a scientist can build a machine which can not be lifted by any other machine?)
Logic is the base of science. Thus, the modernist will place it in the position of the absolute i.e. everything must obey Logic.

Therefore, the modernist expects alleged God? to obey Logic. If God? is not logical, it means that he does not exist.

Fact that Logic is located in the place of the absolute, is not surprising because rational thinking gives the modernist multiple practical benefits so he can have the impression that he posses an almighty tool.

God is in the place of the absolute. Human is not capable of fully understanding God but he has a direct Link to him which facilitates the communication. World is composed of 2 layers: real and spiritual; which divides Human into Body and Soul. Logic is reduced only to a Mind‘s phenomena. It is a useful intellectual tool but it has its limits.
Please note that I’ve put Body and Mind into the same bucket. Some believers would assign Mind a new layer but I do not want to complicate this diagram.

Why Believers and Modernist Disagree?

French psychologist Jean Piaget showed children a room with teddy bear and a few objects. One object was hidden in the way that teddy bear couldn’t see it but it was visible to the children. Despite of some of them claimed that the teddy bear saw it. This disability to wear somebody’s  shoes is normal under the age of seven and it’s called children egocentricism.

How is it similar to the discussion between the believer and modernist? Usually, each party tries to explain to the opponent its points of view but the opponent is stubborn and refuses to acknowledge it. After many attempts, the exhausted “preacher”” gives up and finds comfort in stating that the opponent is too stupid or not sensitive enough to understand. But, in fact, the source of misunderstanding lays in wrong assumption that our mind structure is the only reasonable and even possible one. This person is like a kid convincing others that teddy bear should see whatever he sees.

I’m afraid that we will not be able to settle this dispute ever. It is just not possible to prove God’s existence but it’s also not possible to prove that he does not exist. The only thing we can trust are our subjective feelings. Should we force others to feel the same? Why are other believers so dangerous that we must convert them? Why can’t we see it as a chance to broaden our horizons?

Since, I agreed with myself that my point of view is the only reasonable one it’s time to present it.

I do not know what Absolute is thus I have not given it any specific name. However, Human can have some ideas about it and that I marked as Absolute’. Similarly, we can have some ideas about World which is represented in Mind as World’. It’s a subset of Absolute’ because it must obey its rules. Logic exists only in our Mind and it is only our intellectual Tool for understanding. But we also use other things like Mysticism, Intuition, Imagination, Astrology, Superstition and many others to understand World.

It is worth mentioning that Absolute is in the position which belongs to Truth. For the believer, it is God and for the modernist, it could be Nature. Treating Absolute as something unknown and acknowledging Mind‘s limits creates a more open setting for the discussion.

I’m not very attached to this diagram because it is just another perspective which is good for me at this moment. But I believe that everyone has it’s own concept for this topic and uses mine as an inspiration.

This site uses Akismet to reduce spam. Learn how your comment data is processed.